Paragon 2.0 refers to a redesign of the original Paragon end game experience system that was present in Diablo 3 from shortly after launch until early 2014, when Diablo 3 version 2 introduced Paragon 2.0. Paragon 2.0 is the system found in Diablo 3 and Reaper of Souls today, and it seems unlikely to change during Reaper of Souls. Likely any major updates to the system will come in Paragon 3.0, timed to release with the second Diablo 3 expansion pack.

The following is archived info from the development of the Paragon 2.0 system. The current info can be seen on the pages linked above. The below is preserved for historical curiosity.

Paragon 2.0 made numerous changes to the initial Paragon system. Initially, all paragon experience earned by max level (level 60, at the time) characters counted only to that character, as they moved from Paragon 1 up to the hard cap of Paragon 100. Each level up granted the same attribute bonuses as a normal level up, plus +3% to Magic Find/Gold Find. The Magic Find was the real perk, since characters required 300-350% MF to enjoy a decent legendary drop rate in D3v.

Many questions remain, and the system is still under development, but the basic functions have been confirmed by Blizzard as essentially set in stone.

Paragon points in the Core tab.

Each paragon level on an account will grant each character on the account 1 paragon point to spend on various bonuses. Read that again; if a player has 50 paragon points to distribute and 6 softcore characters, each one of the 6 gets the full 50 points. The points are not shared between characters; each character gets the full amount. The only differentiation is between Hardcore and Softcore, since Paragon levels and points are not shared between HC and SC.

Each Paragon level brings some automatic bonuses to Attributes, Gold Find, and Magic Find (the same bonuses as each level grants in the Paragon 1.0 system?), plus Paragon points.

The points can be spent on various properties in the four different tabs. Players initially anticipated the freedom of being able to dump all of their points into whatever bonus they wished, but by mid-September 2013 the plan was to award paragon points that had to be spent in sequence between the 4 tabs, rather than all stacked into the same tab or specific bonus:[1] 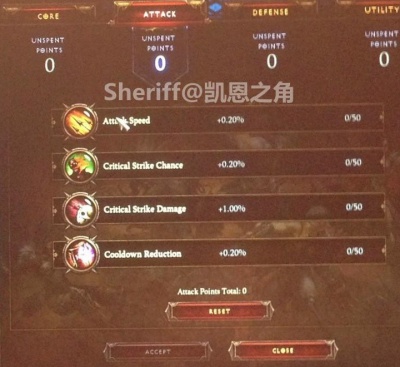 Paragon points in the Attack Tab.

The Paragon points are capped at 50 points in each of the 16 fields, for a maximum of 800 Paragon points. Points added after that can only be assigned to the Core Tab, where they boost your attributes. There is no ultimate hard cap for those, but they can only exceed 50 / 250 after an account reaches Paragon 800.[2]

Three out of the four categories (Offensive, Defensive, and Adventure) can be maxed out if you put a total of 200 points into each of those categories. Any excess Paragon levels earned after these categories have been maxed out will still grant a Paragon point, but you will only be able to spend these excess points in the Core Stat category. The Core Stat category will allow you to choose between added Strength, Dexterity, Intelligence, and Vitality.

One obvious objection to the Sharagon system is that eventually players will need a great deal of experience to advance another Paragon level, and this would lead to a very static feeling. Many players have suggested some sort of individual character level system along with the account wide Paragon 2.0 system, but Blizzard hasn't said anything on that front. Their solution to the problem seems to be a ladder season system, which will periodically reset paragon levels for players who wish to opt in.

Details are not yet finalized, but the design seems to be that a player with say, 134 Paragon levels on their account could choose to create new characters in the new ladder season, and those characters would not have access to the pre-existing account Paragon points. Those characters would thus start out at Paragon Level 0, and gain Paragon points as they leveled up, giving players a feeling of accomplishment and progress. Ladders would run for an unknown amount of time (probably for a few months) and when each ladder season ended the ladder characters and their paragon points would be returned and added to the general non-ladder population.

Ladders would presumably work as they do in Diablo 2 in terms of giving players a fresh economy, with non-ladder items not transferring over to new characters in the new ladder. Then, when the ladder season ends all the experience and items become non-ladder again and merge together. Andrew Day commented on the ladder system in early September, 2013.[3]

I bet you start ladder with paragon 0 and your ladder exp is added to your non-ladder exp in the event of a reset. That’s my hope at least.


Travis Day: That is currently the plan. Paragon experience will be account but will also be broken out by game play mode. Players who play in Hardcore will have a separate hardcore paragon level from their non hardcore characters.

This is all still a work in progress and subject to change but that is what we are currently intending.

One key element of the Paragon 2.0 system is that Hardcore characters apply their gained experience to the account, and thus a character death will still end that character and lose their equipment, but the experience and Paragon Points that character gained will remain after their death. That feature appears to be set in stone by Blizzard.

What is not set is how Blizzard will handle the experience earned by HC characters who died prior to the Paragon 2.0 system. Once the system was announced there was much debate about that issue, with players advocating both sides of the issue. As questions mounted about it, and HC players began to retire their high level characters in order to not risk losing them before Paragon 2.0 came in, Travis Day posted that Blizzard was leaning towards including the experience from dead HCs when Paragon 2.0 went live.[4]

When the Paragon 2.0 system is released our current plan is to take all the experience players have currently accumulated and sum that into a single value, well two values really, HC and non HC. If you have 5 paragon level 100 characters on your account in soft core that we will add that total experience earned into a single value and your soft core paragon level will be equal to whatever that amount of experience translates to into levels.

The current plan is to do the same thing with all of your hc characters. We are still discussing what we do with dead vs active characters but I'm leaning towards including experience of dead hc heroes as well.

The purpose of the paragon 2.0 system is the reward players who want to invest lots of time as opposed to specific characters. Under that philosophy I don't see any reason to deny hc players experience they previously earned.

In mid-2013 the developers began suggesting some future changes to the Paragon Levels system.

One main question fans always ask is what will happen to Paragon Levels in the Expansion. It's widely-assumed the cap will increase from 100, but it's not clear what bonus that would provide, with Magic Find and Gold Find already maxed out at the 300% hard cap at Paragon 100. Perhaps the MF/GF cap would be increased? [5]

Travis Day: The Paragon system was spectacular for what it was trying to accomplish. Sometimes random can be a cruel mistress and the paragon system’s primary intent was to allow you to feel like you’re acquiring progression and even if you’re not getting too lucky with your item drops. We want to take that and expand upon it even more.

We've definitely talked about things like taking Paragon and decoupling it from your character specifically and making it something that is more account-over working. So that any time you invest in the game is rewarded and you don’t feel like we’re taking anything away from you if you want to try new characters or try out different play styles within the game. That’s something we've looked into a lot.

Also, maybe potentially adding some sort of customization within the paragon system. Sort of in the vein of a throwback at a Diablo II start location. We've looked at things like that. We definitely have plans to flesh it our more in time. We don’t need to design it from the ground up. What it does, it does well, and we just need to make it more encompassing.

You've also mentioned that you’re not looking into increasing the cap of Paragon. It’s going to be a hundred for at least a while, right?
Travis Day: For the foreseeable future. I think at some point you can expect the cap to go up. The cap isn't even really there to necessarily make an end point to the player. The intent was for paragon 100 to take a long time to get to. Which it does. But as we improve different aspects of the game (make changes to Monster Power, Monster Density, etc.) the time that it takes players to fill out that cap is shorter than we’d like. And once you do cap out, it definitely removes a very important reward for you – your XP stops going up. So that’s something that we want to address – at some point we’ll definitely look at that cap.

About those customizations to the paragon system – what about the people who are already capped? Will they be receiving any kind of reward on patch day?
Travis Day: Yes, absolutely. If we’re making the sweeping changes to the Paragon, the people who invested time will certainly have the reward that is associated with that investment.