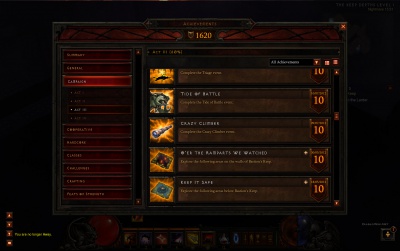 Achievements are a sort of mini-game tied to Blizzard games when played over Battle.net (as Diablo III must be). When players complete various tasks during the gameplay, or special extra efforts, they will earn achievements. These do not grant an in-game reward, in terms of extra items or experience, but are simply bonuses to display on one's Battle.net account.

Achievements in Diablo III are account rather than character-based, integrated into the banner system with achievements unlocking more colors and sigils, and otherwise offering improvements and distinctive visuals to an account's banner.

Achievements are split into eight categories and multiple sub categories within them. They are broad in their requirements and range from taking zero damage when battling Diablo to timed challenges that see players attempting to escape a crumbling vault or collecting all lore books to crafting the highest quality gems.

The vast majority will earn achievement points which tally to give you your overall achievement score. Some award a banner design or embellishment but none award in game trophies or items to be worn, gold or experience.

Conquests are a special type of seasonal achievement added in Patch 2.1. There will be different conquests in each ladder season, most of them requiring a bit more work than normal achievements. Leaderboards will list the first 1000 accounts to complete each conquest in each Season.

All achievements are listed in their categories below.

Jay Wilson spoke about Achievements from Gamescom, in August, 2010:[1]

in.Diablo.d3: Are we going to see achievements in Diablo III? For example, kill one million Fallen Ones with a single swipe, finish the whole game with a naked hardcore character, listen to every single Deckard Cain dialogue?

Jay Wilson: *smiles* Those are very good achievement ideas. We’ll have them in D3, but I don’t think kill one million anything in one blow. Or ever. Those aren’t good; those are grindy. I do like the naked hardcore character completing the whole game though. I’m all over that one.

Leveling was the least important part of Diablo II. Well, aside from gold. I’m sorry but even though you may have had fun grinding to 99 for absolutely no reason, we don’t think it’s a fun mechanic to encourage. ...But guess what, achievements reach that same goal, and can actually have some meaning. What if after leveling 10 characters to 60 you get a unique item? Or dye color? Or title? Or glow? Or anything.

The Diablo 3 Achievement system is an account-based system tied to a player's Blizzard Account ID. Its purpose is to track achievements within all three major games: World of Warcraft, Starcraft 2 and Diablo 3. When combining all the games together, a score dubbed "Blizzard Level" is gained.

Screenshots showing off various Achievements, via the interface and in-game, from the Diablo III beta.