After many previous hints, Jay Wilson confirmed in April 2011 that Necromancer NPCs will be encountered during the course of the game.[1]

The Necromancer is one of the seven playable classes in Diablo 2. Refer to the Necromancer class page in the Diablo II Wiki for full details.

The first gameplay was shown at BlizzCon 2017 and the character is based on the Diablo 2 Necromancer.

Primary weapon on the Diablo 3 Necromancer is the Scythe.

The non-inclusion of the Necromancer in Diablo III was greeted with a great deal of protest by loyal fans, and as a result Blizzard has repeatedly had to explain why they made the decision. Their main argument was that the Necromancer was done so well in D2 that they didn't see much to improve upon in D3, and didn't want to just repeat the same character in the new game. This contrasts to the Barbarian, who they thought they could update and reinvent in interesting ways.

"Our approach for classes in 'Diablo III' is that we don't have a strong desire to bring back classes from the previous game," Wilson told me. "The goal is to try and give people new gameplay and not just re-hash old gameplay. We're not just making a 'Diablo II' with updated 3D graphics."

"The problem was, we looked at the class and didn't think that we could really make him a lot better," he explained. "We could add some new stuff to him but for the most part -- curses, corpse explosion, skeleton pets -- done. That's the class. We wanted to create new gameplay, so we chose to do the Witch Doctor as a different kind of class."

One of the reasons we didn’t do the same treatment with the necromancer that we did with the barbarian is that the necromancer was more fully realized as a class in Diablo II. If we were going to bring him back, curses, skeletons, corpse explosion—you’re done. That’s the class. We felt the job was so well done that we didn’t know that we could do a lot to improve him,, and that choosing to make that class was more or less like putting handcuffs on ourselves and wouldn’t allow us to create new and original gameplay. So we decided to go with a new pet class. We focused with the witch doctor on having him play differently enough from the necromancer so that, say if someday in the future we want to add some of the old classes back to Diablo III, I don’t like those doors to be closed.

The appearance of NPC Necromancers was confirmed by Jay Wilson in an April 2011 interview with Diablo3.cc.[4]

Well, Necromancers actually already appear in D3 to some capacity. We have some NPCs who are necromancers who appear in the game. As far as a group in the universe, I’m sure we are going to continue to use them. As a playable class, it kind of depends on what the community wants and what the team wants. When we created all the classes for D3, we did most of those decisions essentially in secret before the project was actually announced, but we really want to see how the game plays and how people respond to it and what they miss, what they wish was there and we will make our decisions. Feedback from the community is always a focus for us whenever we make decisions.

As An Expansion Character?[edit | edit source]

Though the Necromancer will not be one of the five characters in Diablo 3, the developers have left the door open for the class to potentially return in the game's planned expansions: [5]

"There's a lot of people on our team who aren't happy with our class choices,” he admitted. "But after we've established 'Diablo III' as its own game with its own type of gameplay and experiences, I wouldn't be opposed to looking at old classes. We are trying to design [the Witch Doctor] class so that if we did bring back the Necromancer, there's room for him. We're looking out ahead of time at what our expansions are going to be, so we've got to keep room open for some of those other classes down the road."

There appears to be a level of PR in this reply -- the D3 Team has never ruled out any character from appearing in an expansion -- but it's impossible to know how much this is a serious consideration and how much it's just saying something consoling to keep Necromancer fans on board.

The return of Necromancers as NPCs was confirmed by Jay Wilson in April 2011.[6]

Prior to this revelation, potential Necromancer sightings had been suggested for some time. For instance, here's Diablo 3 Community Manager Bashiok teasing in February 2010. [7]

The Knights of Westmarch and cult of Rathma still exist, so the chances of coming across a paladin and/or necromancer through your travels are pretty good. 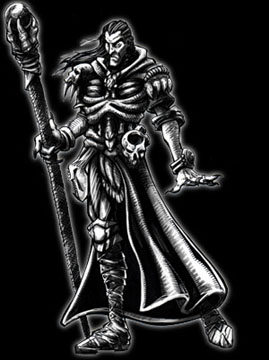 From the steamy recesses of the southern swamps comes a figure cloaked in mystery. The Necromancer, as his name implies, is an unseemly form of sorcerer whose spells deal with the raising of the dead and the summoning and control of various creatures for his purposes. Though his goals are often aligned with those of the forces of Light, some do not think that these ends can justify his foul means. Long hours of study in dank mausolea have made his skin pale and corpselike, his figure, skeletal. Most people shun him for his peculiar looks and ways, but none doubt the power of the Necromancer, for it is the stuff of nightmares.

As might be expected, the devotees of magic are a segregated lot. They are as leery of students of rival disciplines as a layperson is of all arcane practitioners. None, however, are so widely maligned and misunderstood as the Priests of Rathma.

As with most users of magic, the priests of the cult of Rathma hail from the far Eastern Jungles. They reside in a vast underground city located deep within those jungles. Their specific geographical locale is particularly secluded, however, preventing their assimilation into a formal mage clan. But it is this same isolation that has allowed them to pursue their distinct kind of arcane science. For it is through the teachings of Rathma, as well as through years of research and physical experimentation, that these men have come to understand and hold sacred the delicate balance of life and death and are able to twist the line that borders the two. For although the minions of Hell have long possessed this power, among mortals the knowledge to reanimate and control the dead belongs to these priests alone. It is this practice that has led outsiders to refer to them as Necromancers. They truly comprehend the balance of all things, and understand and accept their place in what they refer to as the Great Cycle of Being.

Their culture has subsisted in the shadow of the great mage clans from the earliest days, and in most ways their practice reaches back to a time before magic was formalized into strict disciplines. Although their art is considered "dark", and the people of the outside world shun the priests who practice these arts, these mysterious cultists never suffered the epidemic of corruption that plagued the ancient mage clans. Pragmatists in the truest sense, they are above temptation. They see death merely as a natural part of life and do not seek to deny its arrival. Their singular knowledge of the unknown allows them to face death without fear. These ideals, coupled with an understanding of the natural balance between Order and Chaos, explain why they have not fallen prey to the influences of evil.

Their desire to uphold this balance has brought the Necromancers forth from the isolation of their remote, dank homeland to destroy Diablo and his brethren. The mere presence of these Prime Evils on the mortal realm upsets the natural symmetry of not only the mortal realm, but also the Great Cycle of Being itself. The followers of Rathma seek to right the balance by ridding the mortal realms of non-mortal intervention altogether. They resent any force that would treat humans as pawns in a cosmic game, though they apparently are willing to ally with the forces of Order, but only until such time as the balance is restored.

It is unclear how one becomes a Necromancer (or apprentice).

Training takes place in the vast underground cites of the Necromancers in the Eastern Swamps. They are first taught the ideology of the Necromancers, including the Great Cycle of Being.They then go through lessons on anatomy, how to revive people and a host of other skills. Despite their appearance, Necromancers can move quite fast as they are trained to react instantly in a hostile jungle world.

Once the Necromancer's training is over, he/she is initiated by a vision of Trag'Oul. The Necromancer is tested on summoning skills, and if successful, they are given a bone dagger from one of the corpses.

Necromancers have the ability to reanimate corpses of most entities and to control the recently dead. The dead release spiritual energies that haunt the mortal realms. The Necromancer can focus these energies, giving them manifestation in the corporeal world. Practitioners of necromancy can curse the very fate of a victim by manipulating the Prime energies flowing through all living things.

This is just part of the material available on this topic. The Diablo2Wiki Necromancer article is available in the Diablo 2 wiki, which has a specific Diablo I and Diablo II focus. A lot of information unique to the first two Diablo games is available there. You can find it here: